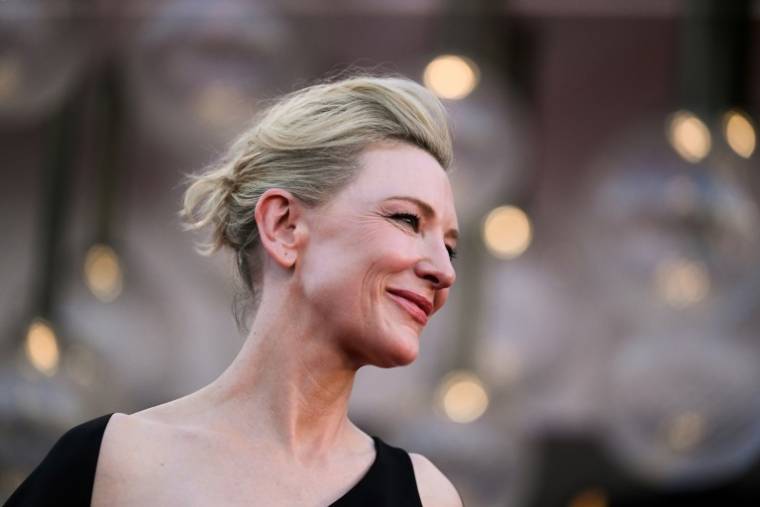 Cate Blanchett during the closing ceremony of the 79th Venice Film Festival, in Venice on September 10, 2022 (AFP / Tiziana FABI)

Cate Blanchett, actress and feminist activist accustomed to juries and awards, is a polymorphic performer, capable of playing an elf princess, Bob Dylan, as well as a famous orchestra conductor, a role which earned her a second prize for interpretation at Venice.

At 53, the Australian actress received her second Volpi Cup on Saturday evening on the Lido for the best female interpretation as a character drunk on power in “Tár”, by Todd Field.

This tall blonde, with a diaphanous face, delivers a marmoreal performance in this drama which evokes questions about identity or “cancel culture”. She plays an ultra-famous conductor, in a relationship with a violinist from her orchestra, who will be caught up in her past.

A role that takes a complex look at the denunciation of harassment or the abuse of power by women over their subordinates, and echoes the commitments of the artist.

Fifteen years before this role as an artist, she had already won the prize in Venice for “I’m not There” by Todd Haynes, where she embodied, crossing the frontier of the genre, another musician, Bob Dylan.

These awards add to a well-filled hunting list for the actress that the general public discovered in the role of Queen of England Elisabeth I (“Elizabeth” then “Elizabeth: the golden age”).

The two-time Oscar winner has shown that she can play anything, transforming from one role to another.

And not hesitating to take risks: she was as well Katharine Hepburn, in “Aviator”, as the elf heroine Galadriel, in “The Lord of the Rings” by Peter Jackson.

And she further proved her comedic talent most recently in the climate comedy “Don’t Look Up!”, where she played a TV presenter insensitive to climate change.

Beyond her roles, Cate Blanchett is a committed activist for the feminist cause, who with #MeToo has become a figure in the fight against sexual harassment.

Her activism, however, placed her on the front lines when she was president of the jury at Cannes in 2018, where she protested against the under-representation of women in the charts, then in Venice in 2020.

She was also part, with Natalie Portman or Meryl Streep, of the collective in Hollywood which launched the foundation “Time’s Up” to help victims of sexual harassment.

A commitment which should not however be confused with its characters: “I do not see artistic practice as an educational tool”, she declared in Venice.

“I’m not interested in agit-prop,” she added, saying the role of actresses in the film industry had improved markedly in recent years but continued to be hampered by the lack of strong leading roles.

Born and raised in Melbourne, southeast Australia, Cate Blanchett was 10 years old when her father, an American business leader, died of a heart attack. The Blanchetts, she confided, then ate rabid cows.

Salvation will come through the theatre. A graduate of the National Institute of Dramatic Art in 1992, she quickly achieved public and critical success with the Sydney Theater Company, before embarking on film.

In 1999, she obtained a Golden Globe for the film “Elizabeth” by Shekhar Kapur, her first major international role. She is on the bill the same year of “Talentueux Mr Ripley” by Anthony Minghella.

Rising to fame, she then starred in the hit ‘Lord of the Rings’ trilogy, her biggest box office success, before winning the Oscar for Best Supporting Actress in 2005 for Martin Scorsese’s ‘Aviator’. .

At the turn of the 2010s, she devoted herself more to the theater with the father of her four children, Andrew Upton. From 2009 to 2013, she became the artistic director of the Sydney Theater Company.

Her role as a fallen bourgeois sliding towards madness in Woody Allen’s “Blue Jasmine” marked her big comeback in dark rooms, and earned her a second Oscar, that of best actress, in 2014.

She also caused a sensation at Cannes in 2015 with “Carol”, a lesbian romance by Todd Haynes.