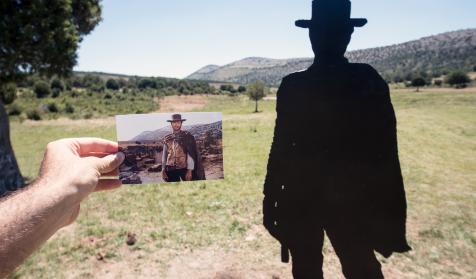 With its wealth of landscapes and heritage, it is no wonder that Metallica kick off all your concerts with a tour of the province of Burgos. He does it at the touch of “The Ecstasy of Gold “, unmistakable theme of The Good, the Bad and the Ugly, spaghetti western starring Clint eastwood and shot partly in the cemetery of Sad hill, near Santo Domingo de Silos. The province of Burgos is a regular scene of cinema and there are many titles that have used its locations. Enjoying them is a stimulating way to travel from home and immerse yourself in a destination that surprises, and Burgos is a movie destination.

One of the first feature films shot in the province was The Lazarillo de Tormes. It was 1959 when Cesar Fernández Ardavín decided to adapt this classic from literature to film. The director thus became the first Spaniard to win the Golden Bear at the Berlin festival and the film, starring Marco Paoletti and Carlos Casaravilla, showed the world places such as Lagar de los Tobalina in Cold, the smallest city in Spain, or the ducal town of Lerma, designed four centuries ago for the enjoyment of King Felipe III.

Years later, in 1963, Julio Coll filmed the thriller in Salas de los Infantes, in Santo Domingo de Silos and in the La Yecla gorge The dead do not forgive. On his journey, a young parapsychologist, played by Javier Escrivá, seeks an explanation for his father’s death. Beyond its plot, the film serves to discover various locations in the southwest of the province in the areas of Demanda and Pinares.

The Good, the Bad and the Ugly (1966). Sergio Leone’s film was shot in various parts of the province: in the municipality of Carazo, in the San Pedro de Arlanza monastery in Hortigüela, next to the Arlanza river and in the Mirandilla valley, in the municipalities of Santo Domingo de Silos and Contreras. In the recording, residents of these towns, students and the military participated. It was they, the soldiers of Franco’s army, who were in charge of raising the 5,000 graves of the sad hill cemetery where that famous three-way duel scene takes place where the phrase is heard: “Hey, blond, do you know whose son you are? You are a son of a thousand parents.” Its conservation is in charge of Sad Hill Cultural Association.

Twenty years later, in 1986, Antonio Giménez Rico made the adaptation of The disputed vote of Señor Cayo, work of Miguel Delibes, one of the best Spanish novelists. Although the writer was born in Valladolid, Delibes felt a great affinity for the province of Burgos and especially for the Valley of Sedano, of which he confessed: «To set things straight from the beginning I will say that Sedano is my town, a small great town of Burgos, where people grow old eating apples and honey. As the setting for the film, Antonio Giménez Rico chose Pesquera del Ebro, in the town hall of Sedano, a place that Delibes felt as his own: «So Sedano is my town and not by chance of being born in it, but by deliberate decision of to have adopted it among a thousand ».

Javier Fesser created a unique universe in his first movie, The Miracle of P. Tinto (1998). These imaginary and surreal worlds exist and are found in La Revilla, a small town in the surroundings of the Sierra de la Demanda. His old halt became the home of Mr. P. Tinto and his wife, Olivia. Although trains have not passed there for a long time, in the worlds of Fesser every 25 years the Pendular Express appears, bringing its bizarre characters. Five years later, Javier Fesser returned to the province of Burgos to shoot part of The great adventure of Mortadelo and Filemón, based on the comics by Francisco Ibánez. Chose for it Aranda de Duero.

Jose Luis Garci shot some scenes of Grandpa in the Monastery of the Vine, in La Vid y Barrios, whose history dates back to the 12th century, when the noble Domingo Gómez de Candespina founded one of the first two Premonstratensian abbeys in the country. El abuelo, a feature film based on a book by Galdós and starring Fernando Fernán Gómez, arrived in Hollywood (it was a candidate for the Oscar Awards for Best Foreign Language Film) and, with it, the authenticity of the province of Burgos.

And being 2021 and 2022 the Jacobean Year, what better time to remember one of the works that pay tribute to the Camino de Santiago? The way, directed in 2009 by Emilio Estévez and starring his father Martin Sheen. The way tells the story of a Californian who makes a pilgrimage with the ashes of his son, who died on his way to Santiago. A good way to get into some of the Burgos stages of this great route.

El Cid, recently released on Amazon Prime Video, takes the viewer to discover a large part of the province, with locations in Frías, one of the Most Beautiful Towns in Spain, or the Monte Santiago Natural Monument, an incredible natural location in the northeast of the province dominated by lush beech trees and the spectacle of the Nervión waterfall, the highest in Spain, in the shape of a horse’s tail.
Burgos Film Commission is an audiovisual production recruitment office that seeks to facilitate recordings in the province and project this territory that offers a huge variety of scenarios, filming facilities and good professionals in the sector. It is also a good formula to attract tourists interested in cinema, a type of traveler who seeks to know the settings of their favorite movies and series.

Burgos is the origin of the Castilian language, of the first European man, cradle of legends, crossroads, as well as the starting point of relevant historical events that have left a cultural, architectural, artistic and ethnographic legacy. In turn, Burgos is a destination for all those seeking a trip full of sensations where heritage, nature, gastronomy and history go hand in hand.