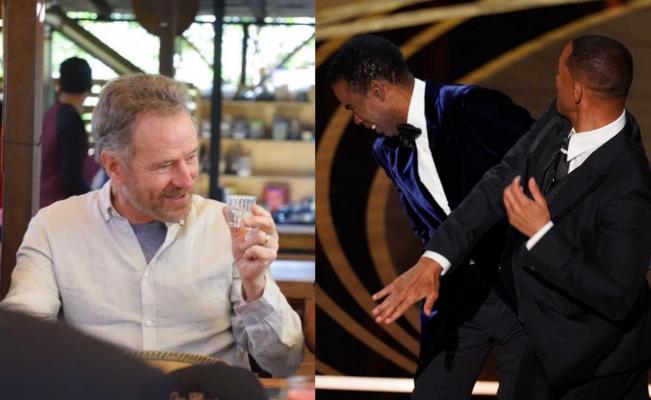 Bryan Cranston Y Aaron Paul have confirmed their love for Oaxacan lands and very recently they decided to make a call for the current protagonists of Hollywood, Will Smith Y Chris Rockafter their encounter in the Oscar.

The protagonists of the famous series breaking bad They were intercepted by paparazzi of the starswhen leaving to eat Château Marmont an exclusive restaurant located in The Angels, Californiaand they were questioned about the problem of their colleagues, something that according to them, can be fixed with a bottle of Oaxacan Mezcal.

The video of this moment with the entertainment reporters was taken up by TMZwho immediately invited Will and Chris to resolve their conflicts with this agave elixir.

A few months ago, Bryan visited Oaxacan lands to present Two men, a mezcal that he created together with his set partner. They did it by visiting a large part of the state until they found the best for everyone’s palate.

This product has won recognition for its flavor in international competitions in New York, London, Berlin and can be obtained through its website and in some parts of Mexico and the United States.

The Oaxacan food It has also been part of the charm that dazzled Bryan during his visit to the state, since he got to know the typical food thanks to a restaurant located in San Martin Tilcajetein the region Central Valleyswhere next to the governor, alexander murat celebrated the investment the actor made in oaxaca.

Although neither of the two actors delved deeper into the subject of Will Smith and Chris Rock, many followers consider that their response has been better than the position of other celebrities who have questioned the behavior of the husband of Jada Smith.

A few days ago, Chris Rock started his comedy tour in bostonwhere he spoke about the incident and, of course, confirmed that after the slap he received from his partner, they have not been in contact.