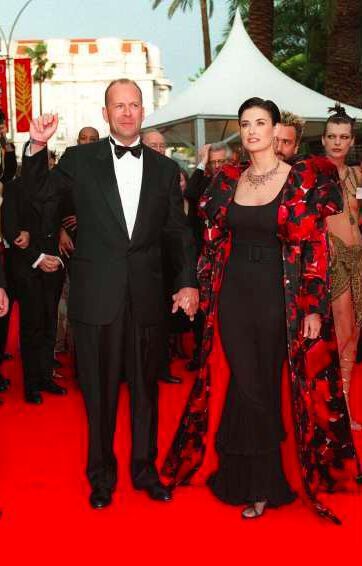 Tuesday, May 17, 2022, Demi Moore, the ex-wife of Bruce Willis shared a vintage snapshot with her during the Cannes Film Festival. A beautiful memory for the actor, suffering from aphasia.

In March 2022, fans of Bruce Willis learned via a press release published by his family, that the actor had decided to stop his career. A difficult decision made by the 67-year-old man after the diagnosis of a pathology from which he suffers, aphasia. This disorder is characterized by partial or complete loss of ability to speak or understand spoken and written language.

Since the announcement of his illness, the actor of diehard chose to stay away from public life. Tuesday, May 17, 2022, his ex-wife, Demi Moore, to whom he has remained very close since their divorce in 2000, wanted to share a beautiful photo with the actor. This is a vintage shot of the couple, during the Cannes Film Festival. Bruce Willis appears smiling and wearing a tuxedo with a black bow tie. For her part, Demi Moore wears an elegant black belted dress, a long red and black patterned jacket and a red clutch. The couple pose proudly on the red carpet. Captioning the post, the 59-year-old actress wrote, “From the Cannes archives, circa 1997“.

After the publication of Demi Moore of the vintage shot where she poses with Bruce Willis, for the preview of the Fifth elementby Luc Besson, the actor’s wife wanted to react. In the comments, Emma Heming wrote: “What emotions, it’s beautiful“. A benevolent message to which Demi Moore replied with many red hearts.

Bruce Willis seems particularly well surrounded by his family, who chose to remain united in the face of the disease. With Demi Moore, the actor is the father of Rumer Glenn (33 years old), Scout LaRue (30 years old) and Tallulah Belle (28 years old). More recently, he also became the father of Mabel Ray (10) and Evelyn Penn (8) with his wife Emma Heming. Together, they form a beautiful blended family.

Bruce Willis and his wife Emma Heming
Celebrities at the ‘Brooklyn Affairs’ premiere during the 57th New York Film Festival on October 11, 2019.

Bruce Willis and his wife Emma Heming
Emma Heming-Willis and her husband Bruce Willis at the The Moderate Rise and Tragic Fall of a New York Fixer party at the Lynwood Dunn Theater in Hollywood, April 5, 2017/

Bruce Willis
Bruce Willis at the photocall of the film “Red 2” at the Mandarin Oriental Hotel in Munich. July 24, 2013.

Sebastian Koch, Bruce Willis and Jai Courtney
Photocall of “A Good Day To Die Hard” in Berlin, Germany on February 5, 2013.

Bruce Willis
Photocall of the film “Moonrise Kingdom” during the 65th Cannes Film Festival, May 16, 2012.

Bruce Willis
Photocall of the film “Moonrise Kingdom” during the 65th Cannes Film Festival, May 16, 2012.

Bruce Willis sick: his ex Demi Moore shares a fond memory of Cannes with the actor