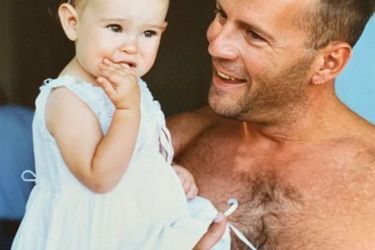 Despite the support of his relatives, aphasic, Bruce Willis gives up filming.

The evil infused slowly. In 2015, Woody Allen had chosen Bruce Willis to appear in “Café Society”, before dismissing him. The production claimed problems with the star’s schedule, before leaking the real reason for his replacement: Willis’ inability to remember and say his long dialogues. In Woody Allen, the action passes more by the language than by the muscles, and the actor could not hide any more his difficulties of elocution, his failing memory. Then Hollywood forgot. And Willis has chained an industrial amount of moronic, unworthy, unwatchable action features, up to 22 in the past four years.

Read also: Emma and Bruce Willis, in love despite the disease

“Precious Cargo”, “Marauders”, “Open Source”, “White Elephant”, “Survive the Game”, “Out of Death”, “Cosmic Sin”, “Apex”, “Gasoline Alley”, “Die Like Lovers” …animated objects released only on video. One of the ultimate, “Paradise City”, sees him reconnect with the sidekick of the time of splendor, when they burst the screen in “Pulp Fiction”, John Travolta. It’s so awful that sadness surfaces, or laughter, in the face of so much waste. The parody ceremony of the Razzie Awards, which rewards the worst performance of an actor, had created a specific category in his name.

Read also: The stars react to the end of Bruce Willis’ career

Why such a profusion of turnips? The specialized gazettes have argued the bad character of Willis, a man with changing moods whose arguments with many colleagues are legion, to justify such a fall. Stallone had accused him of greed and laziness before denying him the demanded salary, 4 million for four days of work in the third installment of his ode to aging testosterone, “Expendables”. It would seem that Bruce Willis, in fact, had little alternative. A survey of the “Los Angeles Times”, published after the announcement of his retirement, reveals the arrangements that had to be made to hire him and the embarrassment felt by those who rubbed shoulders with him on a set. Twenty-five pages of dialogue compressed to a few lines, use of a headset, inability to perform stunts, even simple ones… film. And if it could end before lunch… An assistant heard Willis whisper to him, during the production of “White Elephant”: “I know why you are here, but me, why am I here? “We read him a line of text, he repeated it without understanding, his entourage pampered him”, adds this source.

In “Fortress”, in 2021, Bruce does not line up two sentences in a row, struggles to move, appears worn, tired, without fantasy, mechanical, lost. One of the directors, Jesse Johnson, couldn’t believe it: “The Bruce I had known was only a memory. “He and other directors had recently decided not to film it anymore:” Too painful, we were not comfortable, what a shame to end such a brilliant career like this. And a Willis around could be dangerous. In his manly action spinoffs, the comedian handled guns more often than flowers. Several witnesses claim that during “Open Source”, Willis, a loaded blank pistol in hand, would have taken the wrong target. No injuries, but the technicians and those present understood that something had changed… His last good posters date back to 2012, “Looper” and the independent and charming “Moonrise Kingdom”, by Wes Anderson, where Bruce interprets with finesse a silly police captain. He still alternated large efficient machinery and more intimate works. Unlike Stallone or even Schwarzenegger, confined to characters who express themselves less than their machine guns, Willis knew how to vary the pleasures.

What to remember from him? Half a dozen great films, explosive, expressive acting, eyes as lively as they are mocking and this evidence: the man has revolutionized what an action hero can be. Impossible to imagine anyone other than Willis in the shell of John McClane. This disillusioned cop, smoker, drinker, unshaven, dumped by his wife, who thwarts a terrorist attack on his own, seems an alter ego modeled on his nonchalant personality. Bruce the cheeky kills the bad guys while having fun, without an ounce of guilt or seriousness. A pleasurable farce of which he embodies the laughing face. In English, it’s called “Die Hard”, translated into French by the poetic “Piège de cristal”. It’s stupid, it empties the brain and it’s the box of the year 1988.

We reduced his dialogues to a few lines, he needed a headset and he could no longer perform the simplest stunts. A well-kept secret in Hollywood

Yet the 33-year-old rascal had to fight to win. The producers having considered Richard Gere, Mel Gibson, Al Pacino, Burt Reynolds or Don Johnson, who triumphed in the television series “Two cops in Miami”. Bruce also won a crazy success on the small screen, which decided the decision makers. In “Clair de lune”, broadcast on the ABC channel, Bruce Willis is brilliant. The electric duo he formed with Cybill Shepherd, their comic and sensual dynamics, their attraction-repulsion, all this shaped the success of the first three seasons. When the protagonists finally slept together, in the series, the magic withered, the hearings collapsed. Funny how Willis and Shepherd hated each other cordially, didn’t say a word to each other outside of takes. We thought Bruce was born to play this relaxed, seductive David Addison, yet he had auditioned eleven times before getting the role. The only woman in the room had tipped the scales by praising her charisma.

Before “Clair de lune”, Walter Bruce Willison, a New Jersey suburbanite, son of an American soldier and a German, born in the FRG, did not exist. Security guard, driver, the aspiring actor appeared in a few commercials, appeared on the stage of theaters off Broadway, but was best known in New York for his qualities as a bartender. Afterwards, nothing stopped this cool king. Especially since he was in a relationship with a rising actress, Demi Moore. After the express wedding in Las Vegas, three daughters with crazy names were born from their union in 1988, 1991 and 1994, Rumer Glenn, Scout LaRue and Tallulah Belle. Their existence? Incessant filming, paparazzi at the turn, private jets, villa in Malibu, 20 million dollars for him, 10 for her who was crowned the highest paid actress in Hollywood. Despite buying a ranch in Idaho to raise the kids and go green, the pace was too frenetic, the fame too blinding for these formerly poor people with complex family heritage. The couple-partnership exploded.

In her autobiography, Moore relates somewhat seedy moments crossed with Willis, her dissatisfaction when she moved away to work, her ambivalence vis-a-vis the marital statute. Bruce appreciated his daughters, his home, but the party, the friends, the freedom attracted him just as much. The decade shared with Moore was one of his best cinematic choices. Horrors crept into the list, but at the time the projects seemed driven by artistic ambition. “The stake of the vanities”, crushed by the critics, fiasco at the box office, and directed by Brian De Palma, based on a novel by Tom Wolfe? So much the worse if Bruce shows off excessively.

In “The army of the 12 monkeys”, by Terry Gilliam, his performance could have earned him an Oscar. When Willis cries while listening to Fats Domino, it’s heartbreaking, light years away from his usual irony. In “Pulp Fiction”, by Quentin Tarantino, Palme d’or at Cannes in 1994, he shows himself to be gentle, hushed, skilful, tender-hearted with his partner, Maria de Medeiros. But Willis has too often privileged money to the detriment of quality to claim the fame of a Nicholson, a DiCaprio… “Sixth sense”, by M. Night Shyamalan, where he accompanies a boy who “sees people deaths”, the contributions to the universe of Wes Anderson, his fantastic participation in “Friends” where he turns in derision, serve as salutary exceptions in an ocean of things calibrated to please the brainless. Four “Die Hard” will follow one another, always worse.

After their divorce, Demi came back into her life

Articles devoted to Bruce Willis portray a person who is sympathetic and cold, charming and distant, revolting and agreeable. It’s because he abhors interviews, the press. Politically conservative, the cynical Bruce vociferated as soon as he was called a Republican, close to Bush Sr., going so far as to advance hazy theses in “Vanity Fair” in 2007, on all corrupt politicians, the state being too invasive or the Kennedy murder: “The whole government of the United States was involved in this in one way or another. A guy would have done this alone? My eye. Willis, who campaigned for the capture of Saddam Hussein, at the same time helped veterans of the Iraq war after a phone call from Susan Sarandon, an actress not really on his side. He did not hesitate to pose with Demi and her new husband, the dashing Ashton Kutcher, offering the rare image of a serene divorce.

Transfixed by a pretty brunette twenty-three years his junior, the model Emma Heming, married in 2009, Bruce now personifies a very quiet American, father of five daughters, since Mabel and Evelyn came to complete the initial trio. On his housewife’s Instagram account, the curious fan sees Bruce happy to fish, to prepare Christmas, to have fun with Demi, to trudge in the wilderness, to pamper his children, to swim in the sea that borders the Caribbean islands Turks and Caicos, where he owned a residence. The one who so hated the paparazzi now spreads his daily life. A beautiful life. The movie theater ? A pecuniary passion, it was thought. We now know that he extended the adventure as long as he could. We must resolve it, the facetious John McClane will only thwart domestic attacks.