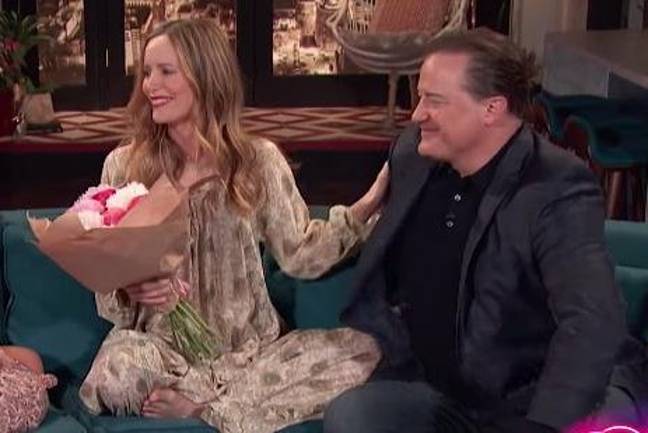 Sure, that’s a bit of a joke, as Mann was married to director and producer Judd Apatow at the time – and still is – but it’s nice to have a bit of Brendan Fraser content every now and then. time, is not it?

Fraser has had a kind of comeback – or Brenaissance, if you will – lately, and this clip from the American talk show Busy tonight once again made the rounds on Facebook and Reddit.

In the clip, Mann starts things off by confessing that she actually fell in love with her counterpart Fraser while they were on set.

Host Busy Philipps began by asking Mann about his’ work crush, ‘to which Mann said,’ I thought maybe I would marry George -Brendan. [Fraser].

She continued, “I started to get really weird with him at work… because he’s, like, naked all day.

“Every morning before work we were in the hair and makeup trailer getting ready and he would come in and kiss me on the lips… got used to that, like, morning kiss.”

“And then one morning he caught me off guard. I took a big bite of oatmeal and he walked in to kiss me and my lips had a sticky oatmeal film on it, and he never kissed me again.

“I never kissed again after that!”

That’s when Fraser arrived to give his opinion, joking, “I don’t like maple syrup. “

Leslie then asked, “Did you know I was in love with you back then?”

“You remember that scene where we were on a log and I had to tell you that I loved you, and I was starting to feel good… It’s because I was actually in love with you.” “

Fraser replied, “How could you not be in love with Leslie Mann? “

Fraser explained how he thinks he even had an argument with her husband while filming. He said, “There’s this guy in the bushes and he’s looking at me, and I know that look. I know men. I didn’t know who it was.

” Then, The 40-year-old virgin came out and I realized it was Judd Apatow. “

If you want more Fraser content, you’ll be happy to know he’s back and currently starring in a new movie called No sudden movement.

It stars Benicio del Toro, Don Cheadle, David Harbor and Jon Hamm, and is out now.