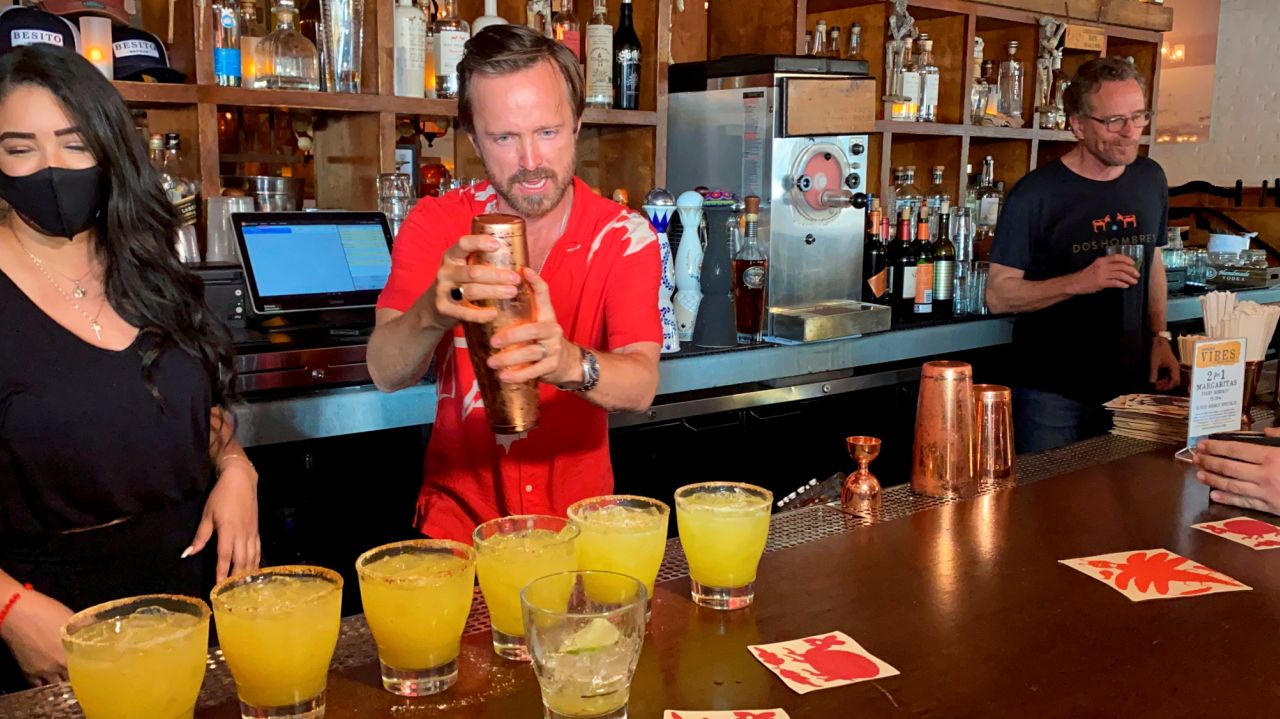 “Breaking Bad” Emmy Award winners Brian Cranston and Aaron Paul, who founded Michal Brand to Homebreak in 2019, were in Huntington on Wednesday to promote their drink at the Basito Mexican restaurant.

“They’ve been here since 5 o’clock, like 6 o’clock, and they’re having a good time,” says Jose Reyes, 36, regional manager of three Long Island restaurants in Little China. “They are the owners of this mezzanine, so they travel all over the country promoting their brand. Great people, they had a great time with our guests at the bar ”.

While the Besto administration launched the program “possibly a month and a half ago,” the president said he had informed the public the day before.

“We posted on Instagram around 2pm and then we started hearing the ringing of our phone: ‘Oh well, is that true?’ People started making reservations, making sure to make room in the bar or dining room. The two guys were just running around and having fun with the customers. People took a lot of photos .۔ “

Social media posts By restaurant show Cranston, 65, who played the role of Meth Kingpin Walter White in the 2008-10 AMC drama “Breaking Bad” in exchange for teachers, and Poole, 41, who committed his crime. I used to play Jesse Punkman, mixing drinks. In a video posted behind the bar, a woman approaches a waitress to make pool users laugh. The stars served the restaurant’s special drink, Mexicoita Margarita, using Dos Hondos mezcal, the president said.

The manager said that Basito has been storing the brand for almost a year.

Cranston and Paul stayed for more than half an hour, appearing on the restaurant’s social media ad, which read, Bartenders! “

Stay up to date with celebrities, television, and more.

Introducing the brand internationally in December, Cranston told an online web summit that three years after the end of “Breaking Bad,” he and Paul said, ‘Come on, let’s go to Oviedo, Mexico. And let’s go through a week and see if we can find something that really appeals to both of us. ‘”

As Paul recalls, “We ran into this small town three hours before Oaxaca – San Luis del Ra ر o. And we tested various missiles there and we couldn’t find them. We were actually dating and no one else. He ran up to us and said, ‘Hey, there’s another parasite [a mezcal distillery] What you did not see. Not on tour, but there is a slight increase. You have to walk along a river with a drill and hit a bush to get to it. “So we didn’t joke and we ran into the operation in the middle of the forest, which looked like a meth lab. I’m not just saying that. It happened in a good way. “

By Frank Lewis
Special for Newsday