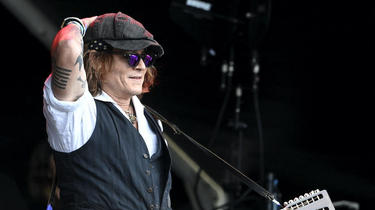 With much less noise than for the release of one of his blockbusters, Brad Pitt inaugurated this weekend the first exhibition of his sculptures, in Finland.

Brad Pitt has chosen to unveil his works to the public for the first time, in a museum in Finland. “It was exciting and wonderful,” Sarianne Soikkonen, curator of the Sara Hildén Art Museum in Tampere, the Nordic country’s third-largest city, told AFP.

Big news! @SaraHildenArt in #Tampere #Finland presents Thomas Houseago’s 1st exhibition in the Nordic countries. In the exhibition you can see his sculptures & paintings alongside a ceramic series by Nick Cave and sculptures by Brad Pitt. Photo: Jussi Koivunen #VisitTampere pic.twitter.com/OFixSLj9tp

The 58-year-old actor, “largely self-taught”, has exhibited nine works, in a joint exhibition with renowned British artist Thomas Houseago, but also another famous debutant, Australian rock star Nick Cave. The two novice sculptors would have created these works in dialogue with Houseago who would be at the initiative of the project called “We”.

Among the nine works by Brad Pitt on display are a large molded plaster panel representing a shooting (entitled “Aiming At You I Saw Me But It Was Too Late This Time”), or a series of silicone sculptures in the shape of house including one called “Self-Inflicted Gunshot Wound to the House”, each hit by bullets of different calibers, lodged in the plastic.

Brad Pitt is making sculptures and they are not what I expected pic.twitter.com/sETHtv7Mwu

The collection also includes its very first sculpture, dating from 2017, “House A Go Go”: a miniature house made of tree bark roughly held together with adhesive tape, or a kind of bronze coffin with feet, arms and faces protruding from them on all sides.

Brad Pitt, this little-known artist: the actor is exhibiting nine of his sculptures for the first time at the Sara Hildén Art Museum in Tampere, Finland. pic.twitter.com/A4NGofLSE6

In an emailed statement to The Art Newspaper, Brad Pitt said of his artistic turn: “For me, it’s about self-reflection…It was born out of what I calls a ‘radical self-inventory’. It’s about getting really brutally honest with myself and considering who I may have hurt and when I’ve just been wrong.”

To the great surprise of a Finland unaccustomed to visits from Hollywood stars, the actor made an appearance at the exhibition on Saturday, along with singer Nick Cave, who was also exhibiting (glazed ceramic figurines retracing the life of Satan, explains a press release).

“For Nick and me, it’s a new world and a first performance. It just feels good,” said Brad Pitt on Finnish television Yle on Saturday, who did not know he would be present. “As far as I’m concerned, it’s about introspection. It’s about knowing where I went wrong in my relationships, where I made a mistake, ”explained the star once again.

Note that Brad Pitt is not the only actor to have an artistic flair, and perhaps he also wishes to atone for his mistakes through his creations? Recently, Johnny Depp’s paintings were exhibited in London, where they sold for an amount equivalent to 3.5 million euros.

Brad Pitt: for the first time, the actor exhibits his sculptures