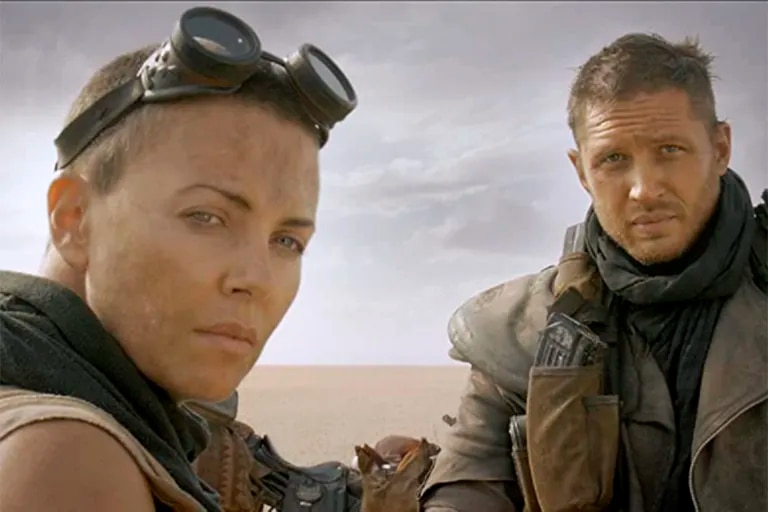 When the casting director of Mad Max: Fury RoadRonna Kress, saw Charlize Theron already Tom Hardy chatting in the parking lot after the first test they did together, he was so excited to see the chemistry that existed between them that he ended up crashing his car.

“It was unspeakably perfect… After the video call, Tom, Charlize and I were in the parking lot. I looked at them and they looked so amazing together… There was no question in my mind that we did the right thing, and as I was waving goodbye to them, I backed my car into a pole and crashed. Charlize ran over, ‘Oh my God, Ronna, are you okay?’ I told him yes, that I was just looking at them. It was that intense,” she recounted. The anecdote, which Kress told Kyle Buchanan, is part of the book Blood, Sweat & Chrome: The Wild True Story of Mad Max: Fury Road which this Tuesday went on sale in the United States.

However, first impressions are not always the ones that count. The same book gives an account, with other experiences, the voices of the protagonists and various witnesses, of the lousy relationship Theron and Hardy had throughout filming.

Buchanan painstakingly reconstructed the filming of the fourth film in the franchise, which chronicles the meeting and journey of Furiosa and Max Rockatansky in a post-apocalyptic world. The film directed by George Miller was one of the highest grossing films of 2015 and ended up winning 6 Oscars. However, the team members who participated in the project remember it as something more like a nightmare than a dream.

Production lasted nine months and took place in the desert of Namibia and South Africa. In that context, good coexistence and the optimization of time and resources were essential, but neither of the two factors ended up taking place. In addition to feeling totally isolated, cast members recall getting frustrated on more than one occasion with Miller’s approach. According to what they said, it was common to start the day without any plan and without a script. Many times, only a few seconds were filmed and others, 14 hours in a row of which only half a minute would remain in the final footage.

“That situation was difficult for Tom. It was hard to see. He really had moments of frustration and anger, ”revealed Zöe Kravitz, one of the co-stars. And she added: “Charlize suffered too, but I feel like he was the one who really took it out on George the most. And it was a bummer to watch.”.

If the entire cast agreed that the director’s method was not the most comfortable, soon the two protagonists realized that their styles of acting -and of facing the scenes- was also unbearable for the other. Hardy sought to take each scene to the extreme, experimenting and asking for justifications for each piece of choreography. Theron, in turn, surrendered to the director’s instructions and, like his colleagues, wanted to simplify the process as much as possible to finish the day quickly, stop swallowing sand and enjoy a good bath.

“We were like two dads in the back of the car,” Theron recalled. In fact, much of the film’s scenes take place inside different vehicles, with them in the front and part of the cast in the back. “We spent our time fighting or directly not even speaking to each other. I don’t know which of the two situations was the worst… And our co-stars had to deal with that tension. It was horrible! It was not a conducive work environment. I deeply apologize,” he added.

But the most tense moment was not lived on wheels. One afternoon, Theron and his co-stars were ready to film, after hours of prepping in makeup and wardrobe, but they couldn’t make it: Hardy didn’t show up. It arrived three hours later than agreed.

Theron called it “disrespectful” and demanded that he be fined “one hundred dollars for every minute he had the whole team waiting for him.” The actor was furious. “He walked up to her and said, ‘What did you say to me?’” recalled cameraman Mark Goellnicht. “He was quite aggressive. She really felt threatened, and that was the turning point for her, because she then said, ‘I want someone for protection,’” he revealed.

Indeed, the protagonist had, from that moment, a member of the production all the time with her. Some kind of makeshift bodyguard. The problem is that that producer, Doug Mitchell, was totally lenient with Hardy’s attitudes. “There came a time when things got out of control and it seemed to me that it was better that this place be occupied by a production company. A lot of what I felt coming from Doug was, ‘Oh, fuck it. I’ll just say it.’ He was a man who forgave another man for really bad behavior, and I didn’t feel safe.”, said the actress.

Indeed, who on some occasions managed to mediate between the protagonists was the experienced producer Denise Di Novi. The co-stars, meanwhile, resigned themselves to understanding that the relationship between the actors was a kind of reflection of the constant tension between their characters. However, when it comes to memory, not everyone agrees.

Hardy assures that he never intimidated his co-star. “Charlize is an intense woman. Very intense, actually. In a good way,” he expressed. And he added: “I mean… Look at her in Monster: It is not someone walking calmly through the park. You can’t evoke that kind of authenticity without tremendous richness and artistic ability. She is a very serious actress. Then no; I don’t understand why she would ever be intimidated by me or in any way afraid. I think that was silly.”

Although the film is from the middle of the last decade, the odyssey of its filming began much earlier. Strictly speaking, this fourth installment of mad max It was going to be filmed two decades ago, and that is why several Hollywood stars tried out for the main roles. For the role of Furiosa, one of the favorites was Gal Gadot, who according to the casting director was “incredible” in her test. Jessica Chastain, Ruth Negga and Gugu Mbatha-Raw also auditioned.

As for “the concubines” of Immortan Joe, Kravitz, Rosie Huntington-Whiteley, Abbey Lee, Riley Keofgh and Courtney Eaton prevailed over three superstars: Jennifer Lawrence, Rihanna and Margot Robbie. “Usually, the actors appear very casually dressed… But… Wow! Rihanna looked spectacular when she walked in,” Miller recalled. “I’m not sure she was aware of the content of the film, so she dressed as Rihanna, which was the right thing to do,” she mused.

The director’s first choice to play the role that had made Mel Gibson famous – who was ruled out due to age and various public controversies – was Heath Ledger. In fact, the negotiations were already started and underway, but the talented actor died before the project was completed, in 2008.

“The most important person in my mind was Heath,” Miller confessed. “Every time I passed through Sydney, he would show up and we would talk in general about things, and then we started talking about mad max. We lost him, which was a shame, not because of the movie, but because he was an exceptional person,” she explained.

So the filmmaker thought of Michael Fassbender, Jeremy Renner, Armie Hammer, Eric Bana, Sam Worthington and Joel Kinnaman, but it was another performer who began to gain possibilities: Eminem. “Have done 8 Mile and I found it really interesting. I thought, ‘he’s got that quality,’” Miller said. The director consulted with Brittany Murphy, who had worked alongside him on both Happy Feet like in 8 Mile and “had no reservations about what a wonderful talent he has.”

Before the locations were defined, it was speculated that the filming could take place in Australia. With that plan in hand, the director tried to convince the singer, but to no avail: he had no intention of getting so far away from his house.

No one can doubt Theron’s talent for transforming into someone else when the cameras turn on. However, that process begins much earlier. The actress was vital for the construction of Furiosa. The idea was that the heroine of the story would wear platinum dreadlocks and that she would have tattoos on her face. “More or less, a costume that made her look more like Barbarella,” the actress explained.

“In the original storyboards, Furiosa and a lot of the characters had these big, grinning jaws tattooed on them like on a Spitfire fighter plane,” revealed prosthetics artist Sean Genders. “I felt like it was going to be iconic,” he added. However, Theron and hair and makeup designer Lesley Vanderwalt declared war on long hair, insisting it was impractical for a warrior like Furiosa.

“I called (Miller) and said, ‘I don’t know how you do it in the mechanics room with all this hair,'” Theron said. “I think we need to shave her head and she needs to be a more androgynous, down-to-earth character,” he added. The critics and the box office proved him right.

Anger, violence and impromptu bodyguards: Charlize Theron and Tom Hardy hated each other on the set of Mad Max: Fury Road