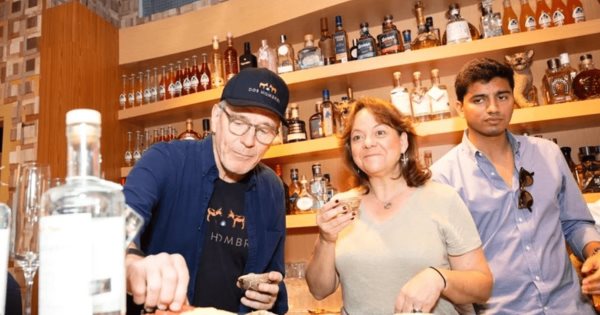 The actor American Bryan Cranston, star of “Breaking Bad” and “Malcolm in the Middle”, visited the Mexico Pavilion at Expo 2020 Dubai, which takes place within the framework of the Universal Expositions that for 170 years “have provided a platform to show the greatest innovations that have shaped the world “, in addition to being a stimulus to” stimulate cultural and economic exchange between nations. “

Cranston made a tour of the Mexico Pavilion, called “Weaving lives”, which has a facade that required 7 kilometers of raffia of different colors that were hand-woven by Mexican women from the community of Etzatlán, Jalisco.

The actor He went to that space to promote the mezcal “Dos Hombres” that he put on sale together with him. actor Aaron Paul.

“The actor of the acclaimed television series ´Breaking Bad´ was received at the Mexico Pavilion by the director of the Business Center, Gino Demeneghi and by the curator of Mexico, Martha Jaramillo, who were in charge of directing the tour of the Weaving Lives Pavilion “said the Pavilion team in a statement.

He explained that inside the Pavilion, the actor Also recognized for his role as “Hal” in the television series “Malcolm el de en medio”, he met some of the attractions in the pavilion, such as immersive experiences by Mexican photographer Pepe Soho.

The Mexico Pavilion at Expo 2020 Dubai, which will be available until March 31, 2022, measures 900 square meters that are divided into three levels of 300 square meters each.

“On the first floor, attendees will enjoy Mexican cuisine and connect their palates with our ancestral roots through the proposal of a restaurant run by Grupo Meshico.

Meanwhile, on the second floor of the pavilion there are two spaces dedicated to establishing and weaving important ties for investment, tourism and economic reactivation, an open window for hundreds of Mexican SMEs in front of the world, and an opportunity to show our visitors the wealth of the states of the Mexican Republic, “reported the Ministry of Foreign Relations.

After making his tour, Bryan Cranston was received by the Undersecretary for Multilateral Affairs and Human Rights of the Ministry of Foreign Affairs, Martha Delgado at the Business Center to learn more about the mezcal “Dos Hombres”.