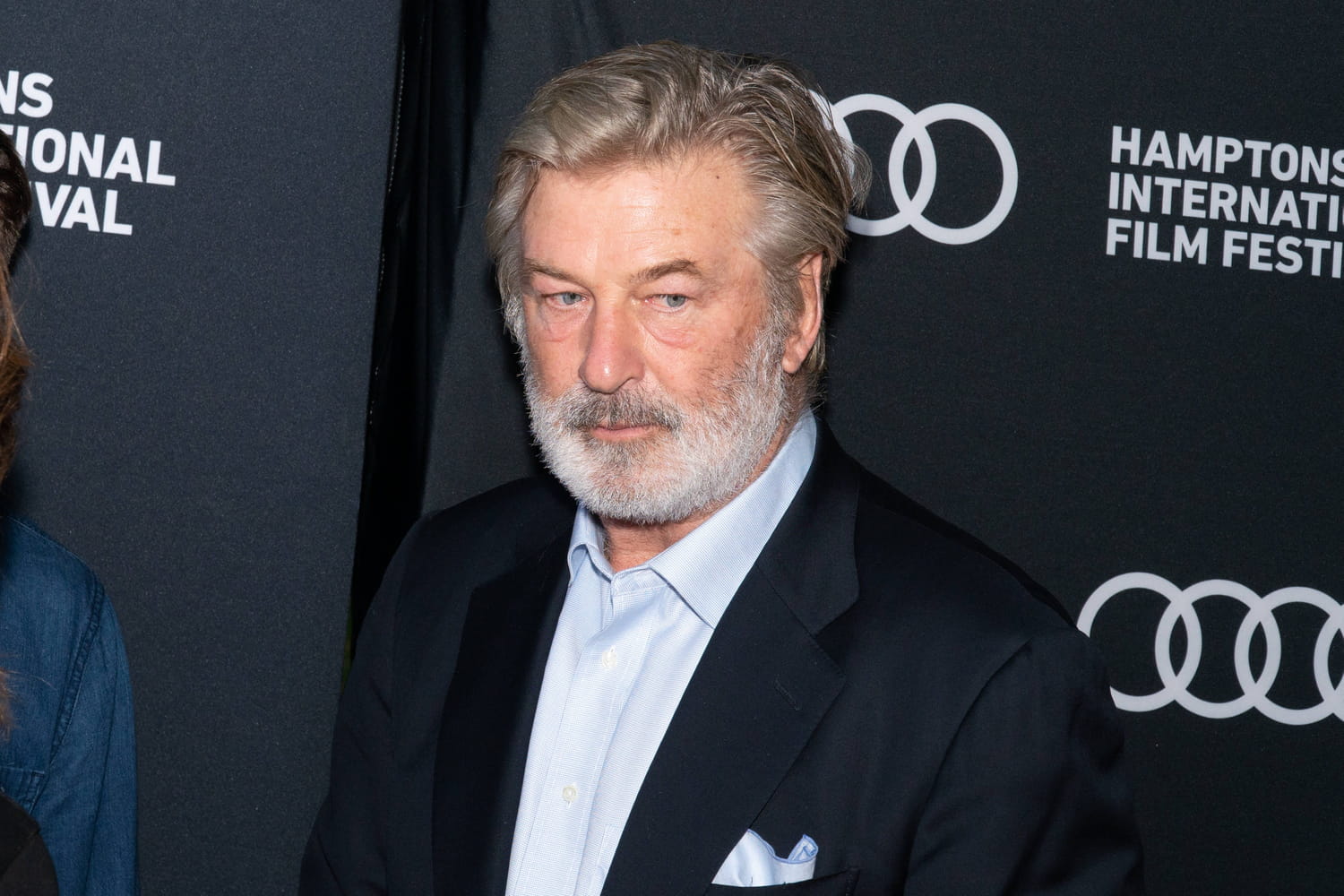 ALEC BALDWIN. Alec Baldwin’s responsibility for the death of Halyna Hutchins on the set of Rust is the subject of a complaint. The actor is accused of “playing Russian roulette” and failing to respect safety rules.

[Mis à jour le 18 novembre 2021 à 15h28] Alec Baldwin’s responsibility for the death of Halyna Hutchins on the set of the film Rust had been dismissed. But the situation is now complicated for the actor who is the subject of a complaint by the scriptwriter of the film. The latter denounces a prejudice “caused intentionally” according to her, which resulted in her “emotional distress”. According to counsel for the complainant, “the events which led to the triggering of a loaded weapon by Mr. Baldwin did not constitute mere negligence”.

According to the lawyer for the script writer from Rust, Alec Baldwin should have checked the weapon before firing or should have made sure that the safety rules specific to the shooting were respected, that is to say that the gunsmith should have explicitly show him that the gun was not loaded. “He chose to play Russian roulette when he fired a gun without checking it and without the gunsmith doing it in his presence. His behavior and that of the producers of Rust were dangerous.” This is the second lawsuit filed against Alec Baldwin in connection with the fatal accident that took place in the film. He’s not the only one facing legal action: assistant director David Halls, who assured the actor the weapon was not dangerous, and gunsmith Hannah Gutierrez-Reed, are also the subject of complaints.

Actor Alec Baldwin, 63, accidentally fired a gun at two staff members of the Western Rust, while filming at a ranch commonly used for theaters in New Mexico, on October 21, 2021 at 1:50 p.m., killing one person and injuring another. Cinematographer Halyna Hutchins and director Joel Souza “were shot and wounded when Alec Baldwin discharged a gun used for filming” while rehearsing a scene where he had to take a revolver out of his holster before pointing it at the camera. Armed with what was to be a prop without real ammunition, he then had to shoot in the direction of the camera. According to the IATSE Local 44 union, which represents many trades, the magazine of the revolver used by Alec Baldwin contained a live bullet.

“I heard like a whip then a big boom” describes the director Joel Souza. The magazine of the real weapon contained real ammunition and not blanks. According to an affidavit by an investigator from the Santa Fe County Sheriff’s Office, Alec Baldwin’s shot hit Halyna Hutchins in the chest and Joel Souza in the right shoulder. Halyna Hutchins was pronounced dead upon her arrival at Albuquerque Hospital.

Halyna Hutchins, director of photography, was evacuated by helicopter to a nearby hospital, where she was pronounced dead by doctors. Born in Ukraine in 1979, this regular on film sets had first married a career as a journalist before moving to Los Angeles and starting in the film industry as an assistant. Before the shooting of Rust, she had worked on the films Blindfire by Michael Nell (2020) or more recently The Mad Hatter by Cate Devaney (2021). She was 42 years old. The second victim is Rust’s director himself, Joel Souza, 48. Admitted to the hospital, he came out a few hours later with a shoulder injury.

According to the first elements of the investigation, the responsibility of two members of the team is in question following the drama which occurred on the drama of Rust. They are gunsmith Hannah Reed and assistant director David Halls. The latter was supposed to check that the weapon complied with safety standards. The production company announced on October 25, 2021 that he had already been fired from shooting a previous film following an incident … involving a gun, in 2019.

For its part, the American site TMZ unearthed an interview with Hannah Reed, the gunsmith working on the film Rust. In a podcast titled “Voices of the West”, the daughter of Hollywood gunsmith Thell Reed explained her experience on the western “The Old Way” with Nicolas Cage where she had worked for the very first time as chief gunsmith on a movie. “I was really nervous at first, and I almost turned down the job because I wasn’t sure I was ready … But once on set, it went really well.” Also in this interview, she explained that loading blank bullets into an accesorized weapon was “the most terrifying thing” for her.

In the aftermath of the tragedy, on October 22, 2021, Alec Baldwin reacted on social networks: “Words fail me to express my amazement and my sadness after the tragic accident which killed Halyna Hutchins, a wife, a mother and a colleague deeply admired, “said the actor behind the shooting on Twitter, ensuring in passing “to cooperate fully with the investigators of the police”. For his part, the victim’s husband, Matthew Hutchins, told the DailyMail that he spoke with Alec Baldwin. “He is a real support,” he said. He also said he intended to publish an official statement on Twitter, in which there would be more details on the memorial project organized with AFI, the American film institute, which is underway.

“Mr. Baldwin was questioned by police,” Santa Fe sheriff spokesman Juan Rios told AFP in the first hours after the incident. “He provided statements and answered certain questions. He introduced himself voluntarily and left the building after the interrogations were finished. No prosecution was initiated and no arrests were made,” he said. -he adds. While local media broadcast photos of devastated Alec Baldwin on the sidelines of this hearing, several American media indicate that it was he who pulled the trigger during the accident and that a scene was being shot or rehearsed. However, he was not responsible for the weapon, since there was a gunsmith on the set and the assistant director had to check the weapon before and after use. Two complaints were nevertheless filed against him by two members of the film crew, including one for “negligence”, accusing him of not having respected the safety measures relating to the use of firearms on the site. a shoot, when he must have known about it.

While attempts by several media to reach the actor were unsuccessful, the newspaper Santa Fe New Mexican posted several photos of Alec Baldwin in tears outside the sheriff’s office, on the sidelines of his police hearing. The actor appeared “distraught” while on the phone. Journalist Rick Folbaum, presenter at WGCL, a CBS Atlanta affiliate and former CNN and Fox News reporter, took over on his Twitter account several of these photos. At 63 years old, Alec Baldwin (Aviator, The Infiltrators, Mission Impossible) has already made the front page of the tabloid press several times, in particular for an altercation with a photographer in 1995, an anger in a plane in 2011 or an arrest in 2018 for acts of violence.

The Hollywood Reporter, quoting a production spokesperson, immediately referred to an “accident” involving a prop that had to be blank loaded. A track that remains privileged. While an investigation has been opened to clarify the circumstances of the tragedy, no prosecution against Alec Baldwin or any other staff member has been initiated at this stage, the police statement said. Sheriff’s services seem to confirm that the incident was linked to a weapon used as an accessory on set. Lawyers for gunsmith Hannah Gutierrez subsequently raised the hypothesis of sabotage, ensuring that she “does not know where these live bullets come from”. For his part, assistant director David Halls admitted to investigators that he “should have checked [toutes les cartouches] but didn’t. “

Regarding the fatal accident on the set of Rust, it would appear from the IATSE Local 44 union that a live bullet was accidentally left in the magazine of the revolver used by Alec Baldwin. The search warrant and the statement of the investigating detective reveal how the day unfolded until the shooting that caused the death of Halyna Hutchins. The day of filming started late in particular because the production of the film had to hire a new camera team following the resignation of part of the team for reasons relating to safety on the set but also for accommodation. Joel Souza tells the detective that the team was working with a single camera that day. According to the director’s statements, three people had touched Alec Baldwin’s weapon before the shot: gunsmith Hannah Reed, then assistant director Dave Halls and finally Alec Baldwin himself. Hannah Reed had prepared three accessorized weapons. Dave Halls took one and gave it to Alec Baldwin. According to the detective’s statement to the Santa Fe County Sheriff, Halls was not aware that there was an actual bullet inside the magazine. This one shouted “blank gun!” on the set to warn that the use of this weapon was completely safe.

Joel Souza’s testimony is very important for investigators who detail his statements in their statement to the Santa Fe County Sheriff’s Office. The director explains in particular that the actors and the crew had prepared the shooting of the scene before having lunch. then took their lunch break away from the rehearsal area around 12:30 p.m. When the team returned to the area, Souza explains that he doesn’t know whether the weapon Alec Baldwin was rehearsing with had been verified news or not. “Joel said that, according to him, nobody is searched for real bullets before or after the shooting of scenes” affirms the statement of the police force. “The only thing that is checked is whether the guns contain real ammunition or not. Joel says there must be no real bullets near the scene.” After lunch break, the camera angle was changed to avoid shadow. Then, as Alec Baldwin was explaining how he was going to behave in front of the camera, he pulled his revolver from the holster. This is where the gun fired, confirms Reid Russell, a cameraman who was present on the scene.

Several accidents with weapons took place on the set

The languages ​​are loosening little by little about the shooting conditions of the film Rust. Several incidents with real weapons would indeed have taken place the week preceding the tragedy without causing victims or having been declared to the police. Prior to the crash, the gun Alec Baldwin accidentally shot had previously been used on set, “to pass the time,” with crew members shooting cans of beer according to The Wrap news outlet.

Alec Baldwin: complaint against the actor after the fatal shooting on the set of Rust