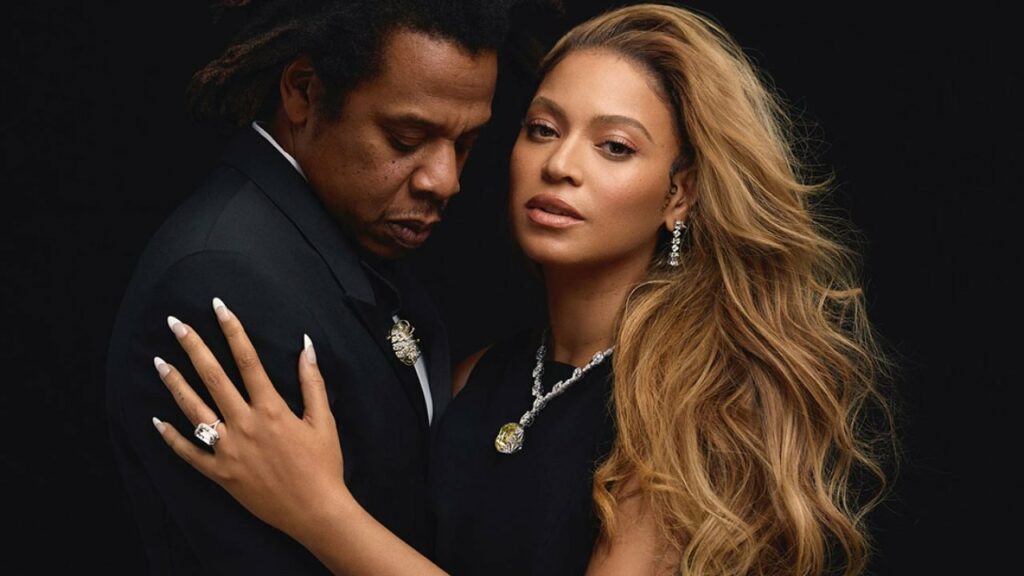 Famous luxury jewelry designer Tiffany and Co presents his new collection in a sparkling pub. Diamonds, a couple of stars and to top it off, a legendary title « Moon River » of the diva Audrey Hepburn.

The advertising campaign of Tiffany and Co continues with a new video that highlights the beauty of diamonds and love. After the commercial « Date night » which was a success, the jeweler returns with a new romantic video. The advertising campaign carried out by Emmanuel Adjei, the co-director of the film Black is King is a real stroke of genius. There are emblematic pieces of the jeweler, a painting of the painter who died prematurely. Jean-Michel Basquiat « Equals Pi » whose blue is reminiscent of the eggs that serve as a setting for Tiffany jewelry, as well as a featured legendary couple.

The Tiffany and Co commercial was shot in the Orum residence in Los Angeles. It begins with a shot of the artist Jay-Z in front of typing. The scene is intentionally vintage to emphasize the romance of diamonds and their timeless character. It continues with the image of Beyoncé who performs a song on the piano. Scenes from the life of the iconic couple also appear. The diva’s husband is behind the camera and films his wife with a Super 8 camera.

Who are the models in the Tiffany and Co commercial?

You will have noticed Tiffany and Co to present its new collection did not do things small. She called on the most glamorous couple on the music scene: Les Carter. By this, the brand intends to orient its marketing strategy towards a new target. The couple Carter took advantage of this ad campaign to create the scholarship program « About Love ». This is $ 2 million that will be distributed to students attending historically black universities and colleges in the United States.

Tiffany and Co advertising is a true masterpiece of jewelry. We discover a resplendent Beyoncé sporting one of the flagship pieces of the luxury brand. It’s about Tiffany yellow diamond of 128.54 carats and currently worth $ 30 million. The latter is mounted on a long chain of 100 carats of diamonds. The jewel has only been worn by three women before, including Audrey Hepburn. The star completes the picture with two diamond rings of 22 and 15.02 carats.

Jay-Z wears another legendary piece of jewelry, the brooch Bird on a Rock by Jean Schlumberger mounted in tailor-made cufflinks. He sports in his directory one of the pieces of the short story collection Tiffany, a diamond engagement ring. To sublimate everything, his tuxedo is enhanced with a head-turning Apollo brooch.

What is the music for the Tiffany and Co 2021 commercial?

To give her advertising campaign the scale it expected, Tiffany and Co chose the theme of breakfast at Tiffany’s, Breackfast at Tiffany‘s. The film is based on a short story by Truman capote and reveals the talent of Audrey Hepburn. The music performed on the piano by Beyoncé is also that of the film and is entitled « Moon River ». We also notice the nod to the black satin sheath dress worn by the character of Holly in the film. A dress by Givenchy that has since become a symbol.

Audrey Hepburn is a British actress and model. She won the Oscar for Best Actress in 1953 for her role in Roman Holidays. Her rich career earned her many rewards, but she decided to cut it short to get into humanitarian work for UNICEF. Audrey Hepburn is considered one of Hollywood’s greatest actresses today.

” About Love ” music from the Tiffany and Co commercial with Beyoncé