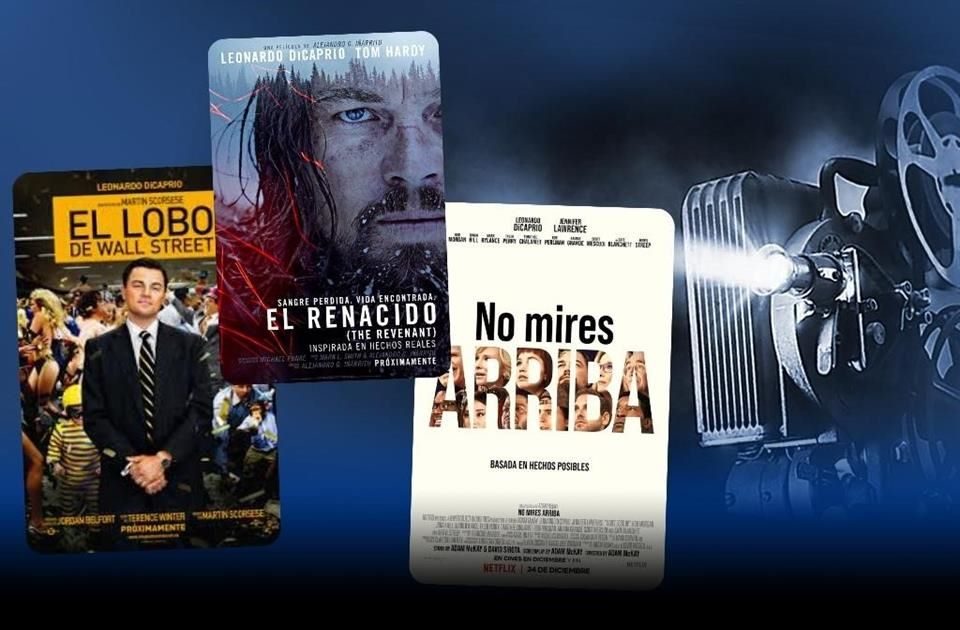 Premiere on Netflix: Don’t Look Up, a film starring Leonardo DiCaprio, about a student and his teacher, who discover a comet orbiting the solar system. By the way, we make a list of the films you must see, of the Oscar winner, such as: Once Upon a Time in Hollywood, The Revenant, The Wolf of Wall Street, Blood Diamond, The Aviator, Who Does Gilbert Grape Love? The Departed, J. Edgar and Inception.

Premiere on Netflix: Don’t Look Up, a film starring Leonardo DiCaprio, about a student and his teacher, who discover a comet orbiting the solar system. By the way, we make a list of the films you must see, of the Oscar winner for The Revenant.

These are the 10 Leonardo DiCaprio movies you must see.

Director: Adam McKay.
Actúan: Leonardo DiCaprio, Jennifer Lawrence y Meryl Streep.
Story: An astronomy student and her teacher discover that a comet is on its way to destroy the planet. After the indifference of the government, and in a society obsessed by social networks, both will fight to give media importance to the event.
Fact: Meryl Streep and Leonardo DiCaprio hadn’t shared a screen since 1996, when they starred in Marvin’s Room.
Dale clic: NETFLIX.

2 ONCE UPON A TIME IN HOLLYWOOD

Director: Alejandro González Iñárritu.
Actúan: Leonardo DiCaprio, Tom Hardy, Will Poulter.
History: In 1820, Hugh Glass participates in a fur trading expedition. After being attacked by a bear, betrayed, and left for dead by his team members, there will be no hostile weather or territory to stop him in his quest for revenge.
Fact: It is the film in which DiCaprio has the least amount of dialogue in his entire career, being approximately ten minutes, but it is also the one that gave him an Oscar.
Click: AMAZON PRIME VIDEO.

4 THE WOLF OF WALL STREET

Director: Martin Scorsese.
Actúan: Leonardo DiCaprio, Jonah Hill, Margot Robbie.
Story: Based on the true story of financial broker Jordan Belfort, about how he turned from a rookie employee to a successful Wall Street mogul surrounded by excess, making his fortune on scams and corruption.
Fact: He broke the Guinness World Record for the most swearing in a movie, with 681 in total. But in addition, he won a Golden Globe for Best Actor in a Comedy or Musical.
Click: AMAZON PRIME VIDEO.

Director: Martin Scorsese.
Actúan: Leonardo DiCaprio, Cate Blanchett, Kate Beckinsale.
History: It tells the life and work of the aviation pioneer Howard Hughes, who also amassed a great fortune in the film industry, being one of the most important producers in the 1930s.
Fact: Won the Oscar for Best Art Direction, Costume Design, Editing, Photography, and Supporting Actress.
Click: AMAZON PRIME VIDEO.

7 WHO DOES GILBERT GRAPE LOVE?

Director: Lasse Hallström.
Actúan: Johnny Depp, Leonardo DiCaprio, Juliette Lewis.
History: After the death of his father, Gilbert must take care of his brother with a mental disability, and his mother with morbid obesity. His emotional life changes when he falls in love with Becky, a funny young woman, eager to take on the world.
Fact: Nominated for an Oscar for Best Supporting Actor and a Golden Globe in the same category.
Dale clic: APPLE TV+

Director: Martin Scorsese.
Actúan: Leonardo DiCaprio, Matt Damon, Jack Nicholson.
History: The Boston police decide to infiltrate an agent into the Irish mob structure that dominates the city. In contrast, the gangsters introduce a criminal into the police force. Both provide information to their respective sides in an all-out fight.
Fact: It is an adaptation of the film Mou Gaan Dou (South Korea, 2002), directed by Wai-keung Lau and Alan Mak. It won the Oscar for Best Film, Best Director, Best Editing, and Best Adapted Screenplay.

Director: Clint Eastwood.
Actúan: Leonardo DiCaprio, Armie Hammer, Naomi Watts.
History: The life and legacy of the FBI Director General for almost fifty years J. Edgar Hoover, a man admired and at the same time despised, characterized by his obsession with stopping any criminal who threatened the nation, made him one of the men most powerful in the history of the United States.
Fact: Nominated for a Golden Globe for Best Actor in Drama and nominated at the Screen Actors Guild Awards for Best Actor and Best Supporting Actor.
Click on: CINÉPOLIS KLIC.

Director: Christopher Nolan.
Actúan: Leonardo DiCaprio, Joseph Gordon-Levitt, Elliot Page.
Story: With the skill and technology necessary to modify and appropriate the secrets of someone else’s subconscious, Dom is tasked with implanting an idea in the mind of a large company boss.
Fact: Leonardo DiCaprio was the writer, producer and director’s only choice for the role of Cobb. It won the Oscar for Best Cinematography, Sound Editing, Sound Mixing, and Best Visual Effects.
Click: CLEAR VIDEO.

This list of movies are those that can be seen in streaming or purchased in DVD and Blu-Ray formats. Unfortunately, there are many that are worth recommending, but they are not available, so they are outside Las Básicas.